“Look very close,” he whispered then
“Watch how I move my hands.”
The magic tricks
I loved so much
Were only that— a sham!


I wish he hadn’t said it, though
I wish I had it back
That last illusion
Genie’s ghost
That swirling cape of black

You shouldn't have let me see your scorecard.
I know you keep it in your back pocket.
You mark it every time you win a round
Every time someone cries because of you
Or sobs
Or breaks
Or gasps in pain and hopeless confusion
Every time you're on top.
Am I a player in your game too?
I want to see if my name is on your scorecard.
When you make me laugh
Or smile
Or tell you I love you
Is that because then you get more points when you take me down?
I'm done.
I quit.
I'm walking away from this.
Mark your card.
You win by forfeit.


When she looked out the window, too,
She saw it yet again
And turned away
But still she feared
That people could see in


She lived out all her days like that
No mirrors, curtains closed
And never knew
This single truth—


That she was beautiful. 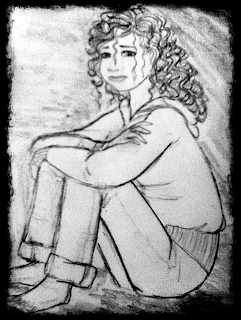 They took my notebook— burned it up!
And my computer too!
'Cause I had written things they thought
No person but them knew


Their secrets all were in there
(It's true I snooped around)
And all the plans they had conceived.
They hid, but then I found!


I looked through filing cabinets
I had to break some codes
I may have hacked computers,
And I might have stolen notes


'Til finally I had it all—
Their whole entire plot!
I was about to tell the world
But found that I could not!


They broke into my house (the fiends!)
My proof, my records— gone
They think that they can force me to
Just shut up and move on


But they don't know me well enough.
They left one thing behind.
They took my notes; but their mistake—
They left me with my mind!

I wandered in a graveyard
In the silence, in the dark
And read the names
Inscripted on
Each stone that bore a mark

Sometimes I could not read the dates
On some, the names were gone
An empty stone
A nameless ghost
A life forgotten long

A person once, that danced and laughed
And sang and ate and slept
Has now become
A silent thing
A memory never kept

Perhaps one day, my headstone too
Will crumble down or fade
My face will vanish
Just the same
As theirs were snatched away

I'll never know their names at all
And they will not know mine
We'll, all of us
Be only ghosts
From once upon a time

I went to South Carolina with the family I work for (who I love), and the history there was just awesome. I wrote this after walking in a cemetary near where we stayed. Also, I decided that I believe in ghosts. Wholeheartedly.
Posted by Andrea Grace at 12:04 PM 2 comments:

A clever trick, a smiling thief
Will you give me your full belief?

A heart of stone, a charming bell
The weapon of the prince of hell

I murder love; I ruin friends
I laugh to see their smiles end

You’ll think my evil heart is good
And all the time, I’ll shed your blood

I’ll kill you soon. I’ll watch you die
And you’ll still trust my every lie

Be careful now. You think you’re safe
But stay on guard, or I’ll invade

I’ll snatch you up, ensnare your feet
And you’ll say thanks

He Little Knew the Vengeance That Awaited Him

Kids are awesome. They are way smarter than most of us give them credit for. Everything they do is either hilarious or interesting. I was at the playground with the two children I babysit the other day, and this was brought home to me again when I witnessed this little drama unfolding before my eyes.

The boy was about ten years old, and he was a little different from the other children. I can’t exactly put my finger on it, but something about him was just not the same. He was a little slow, and his face bore traces of the lonely and resentful expression of a child that is never quite understood. He liked to shout at the others, and the small ones were afraid of him (with the exception of the two-year-old girl I babysit, who treated him with queenly indifference). I had to tell him off, myself, for yelling at and frightening my small charges. He acted rashly, however, when he scared a little four-year-old girl. She ran off, crying, to seek solace from her older sister and her three friends.

Well, I could have told him he’d made a mistake.
Click Here To Read The Rest
Posted by Andrea Grace at 8:44 PM No comments: